Become a memberLogin
Back
Community News 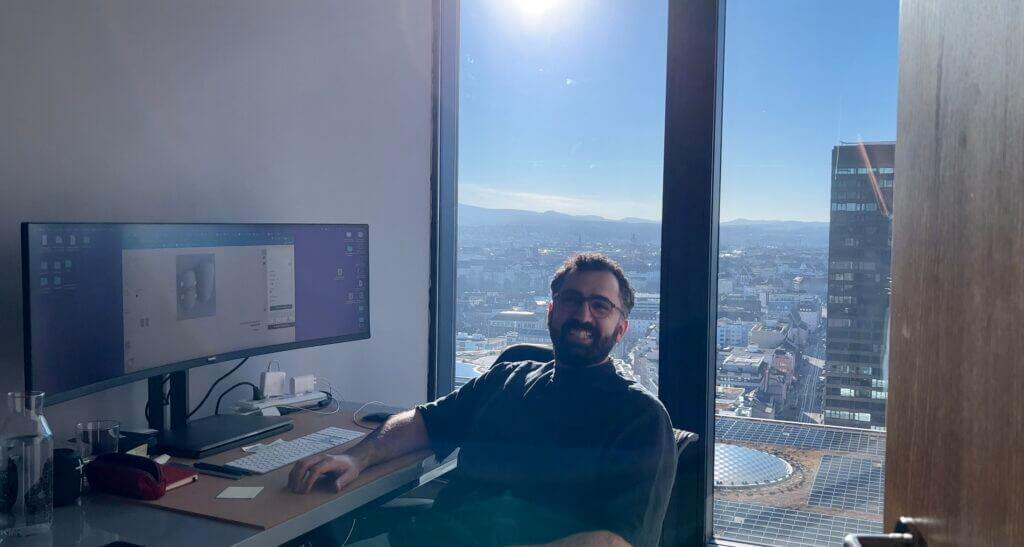 Oktay Arslan, founder of THEOKO grew up in Basel, a city that is not only characterized by architecture and art, but also by football.

He developed his passion for sport at a young age and experienced the world of football in various ways. In addition to playing football himself he also worked as a referee. He accompanied the Swiss Super League from stadium to stadium and gained insights behind the scenes as a production manager at BlueTV.

After his graduation in Industrial design from the University of Applied Sciences and Arts Northwestern Switzerland (FHNW) Oktay founded his own company THEOKO.

THEOKO elevates the use of natural and renewable raw materials for consumer products that have a high carbon-binding footprint.

We had the opportunity to accompany Oktay for a day and learn more about his everyday life in the FlexOffice, his love for football and the initial moments and influences on his progress as a successful founder.

From the idea to the development

As part of a study project, Oktay came in first touch with cork material. The semester task was to develop a product using cork.

He and his study partner, who is also a sports enthusiast, were inspired by football and developed a set of shinpads by patching them together. Through self-testing, both quickly figured out that the cork material feels light, skin-friendly and sweat-absorbing.

After graduation Oktay wanted to continue the idea and develop the product to market maturity. Thanks to his proximity to the Swiss Football Association and his personal contacts with athletes, he could provide some Swiss football professionals his shinpads for testing and evaluation. Their feedback had a significant influence on the improvement and development of the product.

The advantages for human and nature

1. Human-Centric:
It’s skin-friendly, odorless and has a light wearing comfort for female and male football players alike. The alternative product and materials used evoke a totally different feel compared to commercial plastic shin guards, which are known for irritating the skin and are barely tailored to the players individual needs. It’s quite common that players even use cardboard or stuff toilet paper in their stockings – all very unpleasant options that even trigger negative side effect on the player’s agility and ease of movement.

2. Sustainability:
The renewable material cork is obtained from the bark of the cork oak; the cork plug is punched from it and its waste is processed into granules which are then formed into oak plates. THEOKO produces the shin guards and other protective items from these plates.

If the shin guards become waste (max. wearing duration are circa two seasons), the shin guards can be processed back into granules and reused. This circular cycle is also known as the certified Cradle-to-Cradle® design process.

The Source of Inspiration

The source of inspiration for both, the company name THEOKO and the production is Oktay’s sister. Oko is the nickname his sister gave him from an early age. Oktay’s sister grew up with a language impairment.

While he was looking for an adequate production line, he became aware of the Bürgerspital Basel (BSB) through his sister. The BSB enables people with impairment to further develop their skills and take on personal responsibility through access to attractive apprenticeships and jobs.

And of course, BSB employees with an affinity for football are quite fond of working for and with THEOKO. Handling the products and manufacturing the shin guards deepens the employees connection to the world of sports and in particular the Swiss soccer team and players.

Oktay recommends any startup that plans on developing and manufacturing a product in Switzerland, to take the BSB into consideration. It certainly takes time and a learning process on both ends, but once the process is in place, the quality is top. The possibility of scalability of the production with the BSB is also given.

Lots of things are planned for this year. An ad campaign with testimonials will be launched this year featuring Swiss footballers from the professional men’s and women’s league. Some of his testimonials are Juliana Gütermann (FC Basel), Eray Crömert (Valencia FC), and Philipp Borer (Swiss Beach Soccer Team). They all been wearing THEOKO shinpads since day one. Their experience and feedback mainly impacted the development and improvement of the shinpads.

Furthermore, it is planned to equip junior players with THEOKO shinpads, so that the new generation is getting acquainted with renewable materials instead of plascit from early ages on.

An extension of the portfolio is also in the making through more patents for other body parts and medical care for e.g. hip protection for patients, and even products for veterinary medicine.

Fashion and lifestyle products are part of the future portfolio extension e.g. sports bras with fine cork layer inside instead of synthetic fibers. The skin-friendly cork material is perfectly suitable for tight clothes and precents sweat and skin rashes.

The Perks of being at FlexOffice

Oktay was looking for a new office in a top location in Basel after the long home office phases during the pandemic. He made a quick call to FlexOffice and was able to spontaneously come by the Messeturm to take a look around. Everything went extremely smoothly.

During his first visit he immediately noticed the materials used in the space. Oktay appreciated the FlexOffice design philosophy within the space, in particular the usage of sustainable and renewable materials. The FlexOffice cradle-to-cradle® design concept of the Messeturm totally resonated with his own eco-friendly business morals and philosophy.

Additionally, the bright interior design and colourful contrasts, the state-of-the-art equipment and lush greenery in the space evoked a feeling of well-being. His positive impressions of the FlexOffice were in total opposite to the office spaces and providers he had previously visited in the city.

Oktay enjoys a unique perception of space, pace and time while being in his private office on the 22nd floor:

“The view of the city from above, the cars and trains go slower, people walk slower, everything moves slower. Up here I have my retreat where I can think, make decisions, chat with others in the community in the shared spaces. Down in the city is my playing field, when I go out there I’m in action, doing things, mingle with the people, get involved and come back with new ideas. »

Read more about Oktay and his business, future plans and philosophy https://www.theoko.ch/

Thursday, the 25th of August, was a night to remember. We asked the vibrant On Labs community to come together for a few drinks, a good time and to show their skills at the ping pong table for a chance to win a pair of On sneakers. And boy – did they deliver…

“It doesn’t feel like an office, it feels more like a studio atmosphere that constantly empowers us to create, connect and simply enjoy being at work. Having this gorgeous backdrop with the panoramic view of Basel gives me the biggest joy at work.” says Nina Streb, Marketing Manager at Swiss Premium Cosmetics.

Not so long ago, in June last year, we were able to open our new space in the 2nd floor at FlexOffice Murifeld. Since then we have had the pleasure to welcome many of you into our community – a community that is growing every month thanks to you!

© 2022 FlexOffice (Switzerland) AG —Made in Switzerland — All rights reserved.

Book a tour Let us call you

We’re looking forward to meeting you!

Let us call you

Choose your preferred availability and we will get in touch with you.